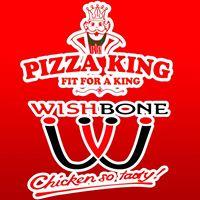 Pizza King LTD is located in Harbor Center, Suva which is considered the heart of the largest city in Fiji. Founded in 1986, it is one of the very few restaurants that has operated and flourished for over 25 years.

Started as just a small pizza shop, Pizza King has grown into Fiji's largest restaurant franchise with over 6 major locations across the island. As a locally owned franchise, Pizza King has surpassed major food chains such as McDonalds, Pizza Hut and KFC making it undoubtedly the number one restaurant in its category. Known for its chickens "Secret" spice and the original taste of its pizza, Wishbone and Pizza King has earned its place as a true leader in Fiji's ever growing economy.